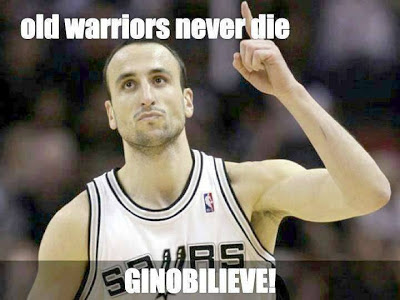 I think that was the best AND worst $3.99 I spent. Ever. It was a roller coaster of a game. Timmy showed up to play. Manu could have been so much better. Parker was stellar. We lost, and that's that.

I did learn, though, that there are certain things you shouldn't do after such a loss. Now I am not saying I did these things - we do learn vicariously, after all - but trust me, these things should be no man's land after the Spurs lose such a crucial game.

5. Whine about a foul that was not called. You win some. You lose some. Whining about such things will just make you look like, well, a whiner.
4. Binge eat. The after effects just make you sick.
3. Think about just how old Timmy and Manu are. Old warriors never die, yes, but they can lose games.
2. Engage in conversation with non-basketball fans. Unless you want your frustration to escalate, if that's even possible. Or if you want to look like a blabbering fool.
1. Watch Adele at the frakking Royal Albert Hall. Else you'll end up bawling your heart out. You just might be surprised at how creative you can be, relating all those heartbreaking songs to a basketball game loss. You just might get shouted at by your neighbors as you sing "You're gonna wish you never had met me!" out loud. (With the freakin' Miami players in mind, obviously.)