May 29, 2013
[UPDATE: November 26, 2013]
I have been informed by Google that Metrodeal is going to take matters to court because of this post being a copy and paste of a case study they had in June 2012. I have republished this post because I can say with 100% certitude that this post is all mine and was written in May 2013 after I had bought a Longchamp Le Pliage bag from Metrodeal. I'll be updating this post as things progress.

Some women have this thing for shoes. While I don't get that - give me my trusty Ipanemas any day - I do understand the concept of having a fixation. I do have a similar thing for bags.

That being said, I have never been able to make myself shell out tens of thousands for a designer bag. Not that I could afford to, anyway. I think that even PHP6000 for a bag is too much for me!
So when Metrodeal started advertising the Longchamp Le Pliage for half the price, I was totally interested. While the bag is nothing more than a glorified shopping bag, if you think about it, I just had (have) this idea in my head that it's the perfect everyday, throw it all in bag.

Being the penny pincher that I am (when it suits me, at least), it took me a while to actually make the purchase; but it did happen. And about a month later, I received the Longchamp bag at my doorstep. For less than half its original price.
Happy shopping ending, right? Thank God for daily deals sites like Metrodeal, which empower average consumers to purchase items that would normally be out of there range.
Trust me, I wish the story had ended right there.

From the get go, I had no thoughts about possibly receiving a fake item. I was, after all, dealing with a big name, and supposedly a reputable one. There was no reason to doubt.
So when the bag finally arrived - shipping didn't start till about a month after the deal was published - I was just happy to have another bag.
Then a friend took a look. The initial reaction was rather emphatic, along the lines of "I'm not sure that's how an authentic Longchamp looks and feels."
Understandably, I didn't want to pay attention to such sentiments, but the seeds of doubt were sown.

As it is with many seeds, they tend to be forgotten. Until they start showing signs of growth. In this case, a mere 3 weeks (more or less) was all it took.
I was out with a friend when I noticed that the handle of my bag was damaged. The 'leather' handle had parts where the 'leather' was worn off. Not a mere scuff mark, mind you. Take a look for yourself.
So what do you think of that? I really don't think a brand such as Longchamp would make inferior products so much so that the handle would be like that after less than a month's use. Unless my sweat is ultra-acidic that it kills leather goods. (Totally not impossible, but even my bags brought from Greenhills don't break down this easily!)

Last weekend, I met up with friends, one of whom had a Longchamp Le Pliage bag as well. It was a smaller size and had the short handle, but we compared our bags anyway.

I suppose the pictures could be better, but the materials felt and looked different upon close inspection. 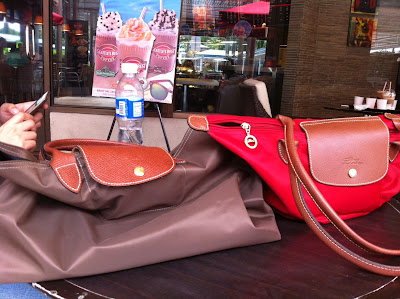 The two Longchamp bags look the same at first glance, but the plastic material feels different - the brown bag feels slightly coarser, more durable. The stitches are finer on it as well. The major difference lies in the leather parts. 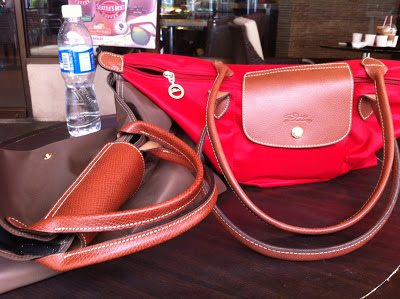 Here are the two flaps.
Spot the difference?

Doing something about it

Prior to meeting up with friends and comparing those two Longchamp bags, I already wanted to write something about the situation, with the hopes that I might connect with others who have bought the same deal via Metrodeal and who might possibly have the same doubts as to the authenticity of the bag. However, via a friend, my concern was brought to the attention of the no less than the founder of Metrodeal.

To be honest, I didn't have high hopes of someone actually admitting that the bag I got was fake; still, it was worth a shot. As you are reading now, though, things didn't go quite as I hoped.

Total disclosure: I was offered a refund as an in-store credit. I suppose that that is something, BUT a refund is not really what I want. What I want to know is whether or not the Longchamp bags sold on Metrodeal are the real deal or knock offs. The statement I was given was along the lines that "no such complaints have been filed". Obviously, I didn't get a confirmation as to the authenticity of the bag.

Don't get me wrong - it doesn't take a rocket scientist to deduce that I do buy "overruns". Greenhills, yes? But I do that with eyes wide open, and not expecting the real deal.

The Metrodeal Longchamp bag story is something else altogether. I bought into the deal thinking that I was getting an authentic bag. Since I am no expert, I had no idea that the authenticity of the bag was (is) dubious.

Now think about it...

How many other unsuspecting consumers have experienced what I have? Looking at this deal - screencap taken a few seconds ago - it is not ongoing anymore, but they have sold 564 Longchamp bags. 564 individuals who may have been duped. And they're open for preorders! 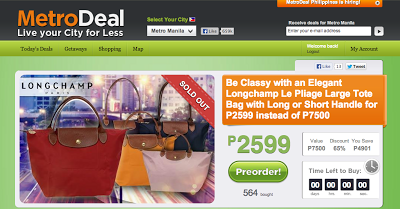 My goal is not to get monetary compensation or anything like that out of this. In case you missed my disclosure above, I have been offered an in-store refund, which is not totally unappreciated.

However, I do want answers. I want to know that I can trust daily deals sites to deliver on the promises expressed in their not-always-brilliantly written copy. I want to know if there are other consumers out there - one of the 564 who bought that deal like me - who have had a similar experience.

If you've read up to this point, do you mind helping me out? Can you share this post and help me get to the bottom of this? If you have had the same experience with Metrodeal Longchamp bags, or you know of someone, please leave me a note in the comments, and I'll get in touch.