Post-reading Thoughts: The Empire Trilogy by Feist and Wurts 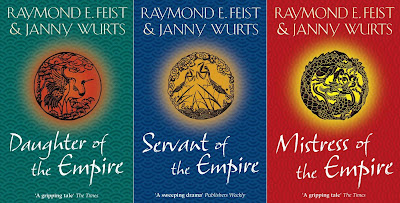 I like trilogies better than epic tales that span five books or more. I say this now a couple of hours after finishing the Mistress of the Empire, the third book in the Empire Trilogy by Feist and Wurts.

These names have been recommended by trusted people many years past, but it was only recently that I found the time and inclination to pick the first book up. And as it often happens to me, I found myself steeped in the plot almost from the get go. While I did have to stop reading when I fell asleep at night - still holding the iPhone - the story and characters would permeate my thoughts every day. (Believe it or not, in the couple of weeks that I spent with the Acoma, I felt the urge to redecorate Tsuranni-style and look up seat cushion specials. The writing did paint very graphic images in my head - from gory to homey!)


Two things that will never leave me...


I think it's best that one reads the three books to really grasp the strength of the story. This may be blasphemous, or it may only be the effect that I have only recently finished the books, but it might just be that The Empire Trilogy is better than The Song of Ice and Fire (Game of Thrones)!