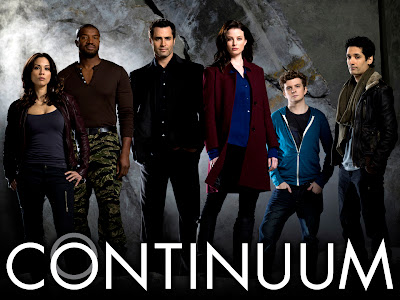 I don't watch TV regularly, but when I do discover a show that catches my attention, I try to take the time to follow it. And if proves to be good, then the obsession begins. It always ends the same way...when the season ends and the break between seasons begin, I feel an inexplicable mixture of sadness and frustration.

That's exactly how I feel right now after finishing the season finale of Continuum.


The premise is simple: a group of people - some terrorists and a police agent are "accidentally" sent back to 2012 from 2077. From Wikipedia:


When a group of rebels convicted as terrorists escape execution by fleeing from the year 2077 to 2012, Kiera Cameron (Rachel Nichols), a future Vancouver law enforcement officer (called Protector), is involuntarily transported with them. In order to track them down and keep them from changing the past (and presumably future), Kiera joins the Vancouver Police Department and uses the skills of a young tech expert, Alec Sadler (Erik Knudsen). The future of 2077 is a dystopian one in which world governments have collapsed and corporations now dominate the planet, instituting a high-surveillance police state and removing many basic social freedoms. The moral dilemma this presents is that the group of eight from 2077 (who call themselves "Liber8"), while self-admittedly having killed tens of thousands of people as collateral, consider themselves to be freedom fighters against the Orwellian corporate regime that dominates their time.

What's great about it?

The technology and the effects, for one. Watch out for Kiera's suit and gun. If only for those, the show is worth watching.

As with many good plots, it's not all about the technology and special effects. It's the complex interaction between the characters, the inner conflicts that the characters struggle with, and the looming question of why the people got transported back to 2012.

The last scene of season 1's finale is one heck of a cliffhanger, so if you like being left hanging, you really should give this series a try. It's only 10 episodes for the first season, so even the busiest of you can manage it!


Image via The Toronto Nerd