Va'Pensiero at the Araneta Center 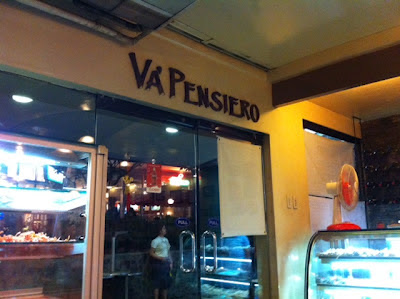 Va' Pensiero is this little Italian restaurant found at the heart of the Araneta Center in Cubao, one of the most bustling areas in the metro. In spite of my love affair with Italian food, I had never heard of this place until recently. When I got the chance to try it out, I had high hopes for the experience, especially since it had this very homey feel to it.

Even though it is located in a very commercialized are, Va' Pensiero manages to somehow have a quaint touch. The shelves of dried homemade pasta definitely added to the authentic feel of the place.

Once you step inside, you almost feel as if you were in one of those Italian places you see in shows like The Sopranos. All those elements contributed to a heightened sense of anticipation. 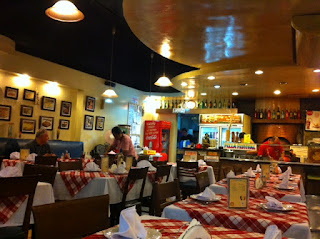 Then came the food.

My original plan was to get a pasta dish so that I could have a taste of the noodles on display that caught my attention in the first place. The prices were not bad either, with a pasta dish averaging at high 200s.

Then I saw that they had osso bucco and risotto on the menu. You know what happened then...but more of that later. First, the complimentary bread basket.

It's not much to look at, but the bread was okay. Not brilliant but not bad either. What I didn't really like is the dipping sauce. I don't know about you, but a simple olive oil-balsamic vinegar mixture does it for me every time. The Va' Pensiero version seemed to have margarine instead of olive oil, and that didn't really suit me.

This is the penne arrabiata, which is almost as basic as you can get when it comes to pasta, yes? Let's just say that the penne was more than al dente (which most of us can live with, I think) and the flavor was made much better with a dash (or two) or hot sauce.

The supposed to be highlight of the meal: osso bucco.
Sure, the price is much lower than at other places (PH450, a little more than $10), but I really would not go back for it. One, the shank was tough and tasted like it had been in the freezer for days. And look closely at the photo, see the black marks on the meat???

The flavor is nothing to write home about as well, and the bone marrow was non-existent.

Don't get me wrong. I am sad to have written this about the restaurant because I really like its feel. Maybe I will give it another try and stick to the original plan this time: pasta.