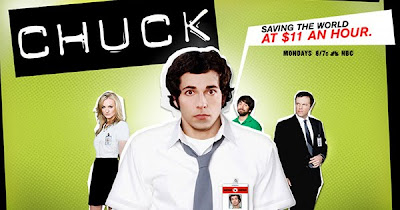 It's been years since I first started watching the TV series Chuck, and for some reason, reruns have been my focus in the past week. I went all the way back to season 1, and boy, am I glad I did.

I was concerned at first that I would sit there and stare at the screen, wondering why in the world I was watching a stupid show. That's exactly how I felt about Glee the second time I watched it. It wasn't the same with Chuck - I guess that since this is the nth time I am doing reruns, I should have known it wouldn't happen.

Chuck has is sappy moments - lots of them, actually - but so many other things make up for them. Even Sarah's "spastic colon" I still find hilarious. (Maybe she ought to read up on colonix reviews to get rid of that condition once and for all.) Then there was the kiss between Casey and Chuck in the second season. Anna kicking the butt of that pro football player. Morgan shouting pineapple in the store.

Too insidery a post, I know. If you haven't seen Chuck, you'll be thinking wth? I suggest that you try it out if you haven't already.

A nerdy computer technician with an almost degree from Stanford becomes a CIA asset with a hot blonde girl and hunky robot of a man for his handlers. Stereotypes? Yes. Amusing? Definitely!