Apple Wants My Mac for Three Weeks? NO!

January 12, 2011
That should have been a NOOOOOOOOOOOOOO!!!!!!!!! Darth Vader style. It has been a few weeks since I noticed a problem with the rubber base of Kalessin. At first, there was just a small bump in the middle left section. I didn't really think much about it until I felt something weird. The culprit? See the image below. 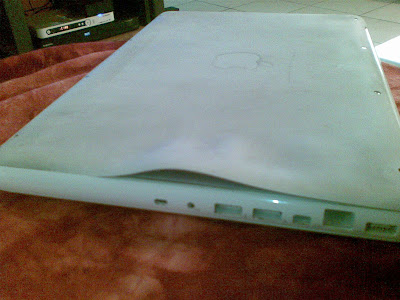 It's disappointing, really. You would think these things don't happen to stuff that Apple makes. After all, you pay a price for their products. When I bought the Mac, it was not a small thing for me. It wasn't like I was shopping around for digital cameras that I can (relatively) easily replace when necessary. I went ahead and maxed out that piece of plastic for a Mac thinking I will not have to worry about the laptop for at least the next year...

Anyhow, it did happen, probably courtesy of the heat. The good news is that the guy at the Power Mac Center in Megamall said that it is PROBABLY covered by Apple under warranty, so they can replace it for free. The bad news is that they are going to have to take the laptop in for up to 3 weeks since they have to order the part from Singapore.

Now you understand why Darth Vader came into the picture.
Reactions: