My Own Chow: Baked Tilapia and Zucchini

July 13, 2010
I love to eat - that should be pretty obvious by now. As you know, I have been staying away from beef and pork for a month now. With beef, I have been successful (although I really could use a huge steak right now). With pork...well, I have had a meal or two. For the most part, though, I have been wracking my brains crazy for fish dishes. While I love fish, you can only have so much of the same thing after a while. The only positive thing I can think of about this regimen is that there is absolutely no need for phentermine, or any diet pill!
Anyway, one of my favorite kinds of fish is tilapia. For my friends outside of the Philippines, I think it's called the same in English. Alternatively, it can also be called St. Peter's fish.
The flesh of this fish is white and tender, making it perfect for grilling or baking. The flesh is sweet and juicy - you don't really need much seasoning at all.
In the Philippines, we normally eat the whole fish - no need to chop off the poor thing's head and tail! ;)
Since it can be quite messy, though, I usually buy tilapia fillets from the supermarket. They're clean and neat, but somehow, the taste is just not the same. So the other day, I decided to bake a whole tilapia. Check that out. 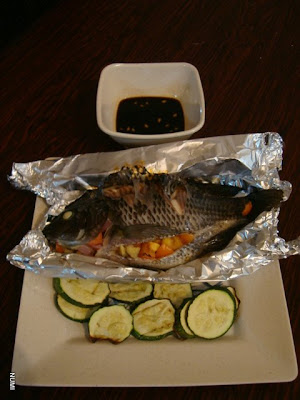 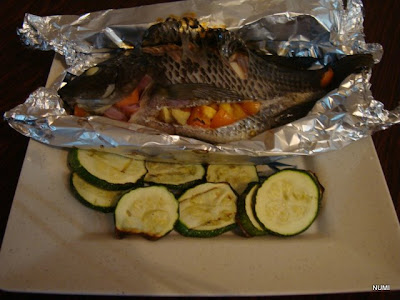 Before you start muttering "gross," let me tell you it was pretty good! I seasoned the fish lightly with salt and pepper; then I chopped up some ginger, onion, and tomatoes, which I used as stuffing. I wrapped the whole fish in aluminum foil and popped it into the turbo broiler (with the sliced zucchini.
The result? Tender, juicy, and flaky fish. Seriously, try getting past the fish's head, and you'll have some of the best tasting fish you'll ever have!
I almost forgot - that little bowl of dipping sauce contains light soy with calamansi, or local lime (I think). It blends perfectly with everything!
Reactions: