Lt. and Numi Do Saigon Day 2

March 11, 2010
Talk about back log. We didn't spend more than a week in Saigon, but we had so many experiences that I think I shall be writing about it in the next week or so. So far, I have written about our first day; the highlights of which include the walking tour we did on our on, the pho overload, and the extremely friendly people. Before we went out that night, we spent some time on De Tham Street, the place where all the tourists seem to converge. There are lots of small hotels there, as well as tourist-oriented bars and cafes and tour agencies. The most popular one is Sinh Cafe, but we decided to go with TNK Tours as they had just opened a new branch and were offering a 10% - 20% discount for their services. 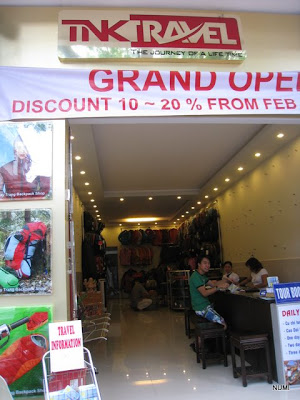 We got the Cai Dao Temple and Cu Chi Tunnels tour for our second full day in Saigon. This was another first for me, as I have this aversion for organized tours. I also do not like the idea of having to get up early, getting into a bus full of strangers, and spending the whole day with them. As it turned out, it wasn't so bad. In fact, I had lots of fun.

The day started out pretty well with Nikki and I riding a motorcyle taxi for the first time. The guy told us that it would cost us 2,000 VND to get to De Tham from our original hotel (Blue River). That is practically nothing - maybe 4 PHP - so we had to make sure that's what he meant as his English was awful. Anyhow, we both hopped onto the back of the bike and got to our destination safely. It was uneventful as it was 7 AM, and the roads were clear. 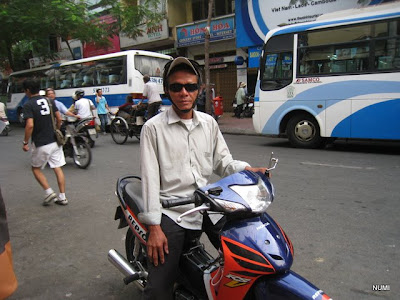 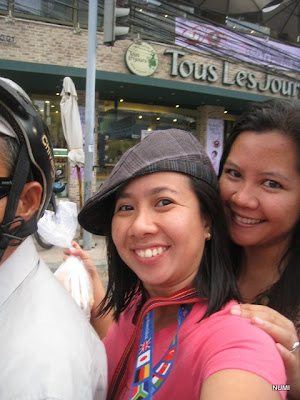 So what happened during the tour? We headed up north with our guide, Slim Jim, who was very partial to Aussies and Filipinos. He was an English teacher for 30 years and knew a lot of idioms - it was so funny how he showed off every single minute. Nikki became the "teacher's pet" and we got a lot of extra kwento.

First stop: bathroom break at a factory where they make lacquer ware. As Slim Jim kept repeating, we killed two birds with one stone. Pee Stop plus factory tour in one. An interesting aspect of the factory is that most of their employees are handicapped people. Many of them suffer from injuries and illnesses due to the Vietnam War. 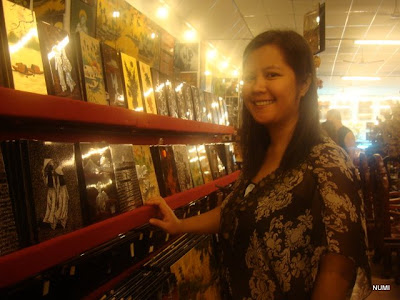 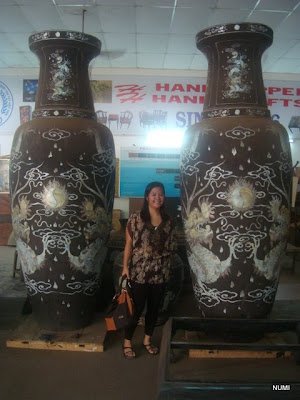 I wanted to bring one of these home! 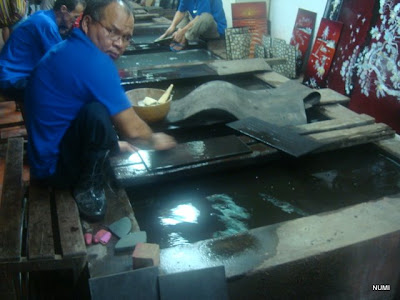 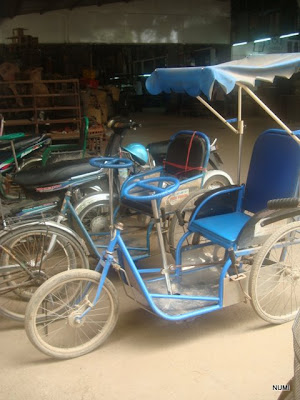 Vehicles for handicapped people. You get to see a lot of them in the streets of Saigon.
Second stop: Cai Dao Temple, in a town near the border to Cambodia. Cai Dao is a Vietnamese religion which is a mix of Christianity, Buddhism, and Confucianism. We got to the temple in time for their service at noon, which was very strange yet interesting. Pics below. 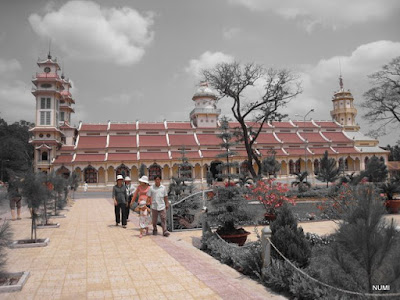 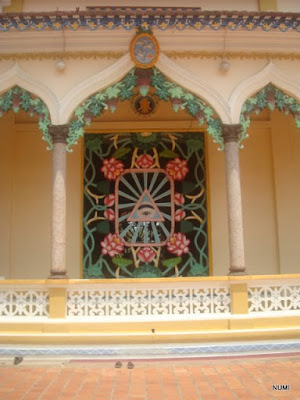 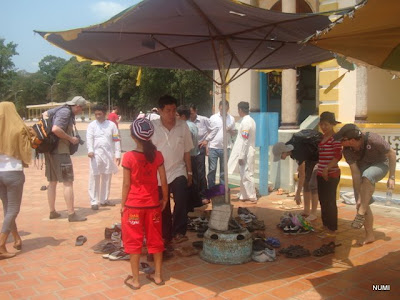 No shoes allowed inside! 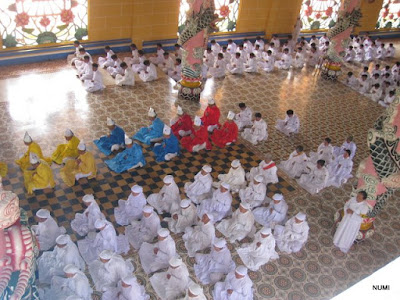 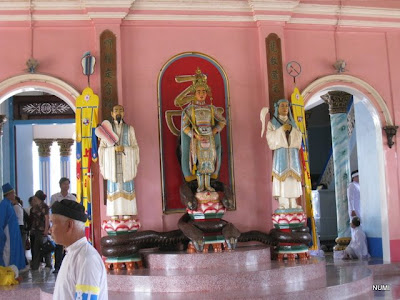 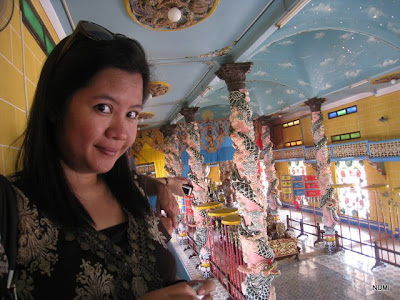 View from the balcony before the service.

We didn't stay to finish the service - visitors are free to walk in and out anytime as long as they are quiet. It was actually a weird experience. I felt a little disrespectful doing that as they were going through their service.

After we left the temple, we went back south to eat lunch at a roadside restaurant. It was a much needed stop as the trip was quite long and the heat was terrible. It's a good thing the small bus had good airconditioning. Otherwise, we would have died in the heat and humidity, not to mention the dust. People who travel without A/C in those conditions probably would need some help from acnezine on a regular basis!

After lunch (photo below), we headed for Ben Ding Tunnels, a portion of the Cu Chi Tunnels, which the Viet Cong used during the Vietnam War. 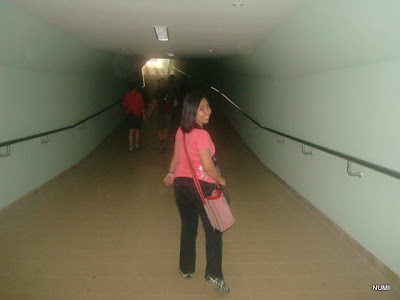 The main entrance to the forest. 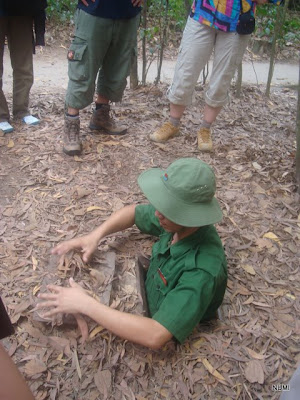 A soldier showing how the local VC used to get into the tunnels. You can imagine that they were all small. No one in our group dared to try going down there! 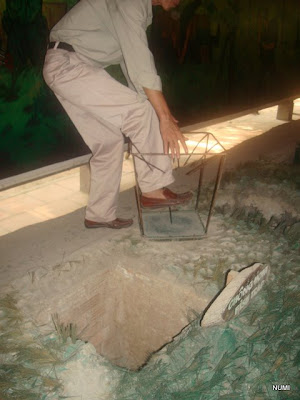 Slim Jim demonstrating how the local weapons and traps were used. They were quite awful: simple but deadly. No wonder the VC "won" the war. 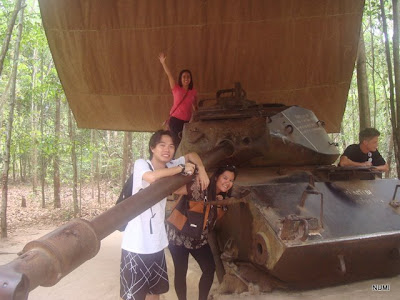 An American tank that was damaged by a landmine. 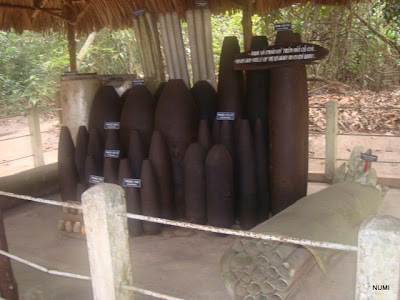 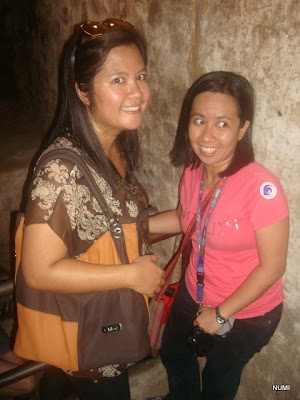 At the first level of a tunnel. This has been reinforced and widened for tourists. I was not planning on going down but a burst of adventurous-ness hit me. I was going to crawl in the tunnel! After all, the shortest route was only 50 meters. (No, that's not panic you're seeing in our eyes.) 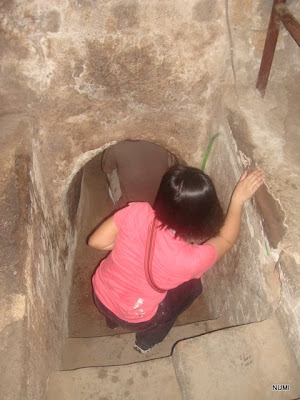 ...then Nikki went ahead of me, and I paused to take a picture of the actual mouth of the tunnel. BIG mistake. It didn't even look like Nikki was going to fit in there, and it was so freaking dark! Even though it made me look stupid and cowardly (after having gone through the trouble of going down), I scrambled out of there as if the devil were right behind me. I'm glad I didn't go, if Tim's face is an indication, it was scary down there: 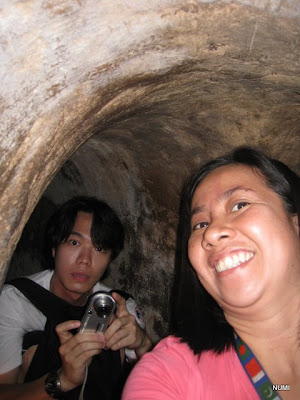 Nikki told me that this wasn't the worst part. There were areas wherein even the flash of the camera wouldn't work! 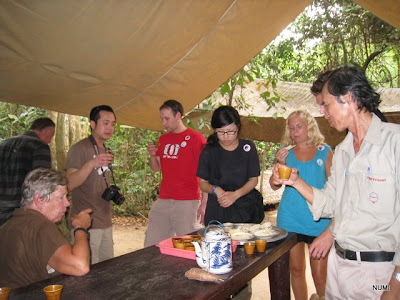 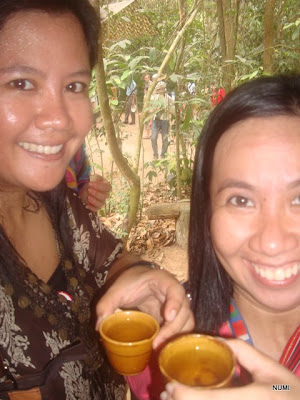 Tea after the tunnels. I certainly didn't deserve it (couldn't hack the tunnels, remember?), but walking in the forest is not an easy thing! ;)

After a brief stop at the souvenir shop (I got my dad a scarf that the Viet Cong used!), we headed back to Saigon. 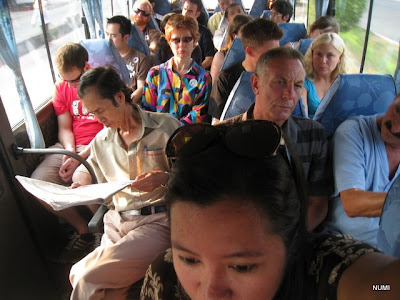 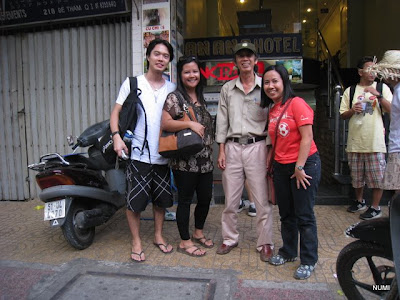 In front of TNK in De Tham. Slim Jim wouldn't let us go without our picture being taken!

That ends my first ever organized tour. For 8 USD, it wasn't bad at all. :)

Next up: My most expensive (or cheapest!) birthday dinner.