March 17, 2010
I never thought I would have to force myself to eat. That was just not possible! Then again, I have never been one to eat breakfast...
Lately, though, I have been trying to force myself to eat something in the morning. See, I have been having problems with my ever-problematic stomach in the past few months. I noticed, though, that in Vietnam, it didn't act up. Not once. The only thing Nikki and I could think of was that I ate breakfast regularly!
So now I am embarking on this project to put food in my belly before I start the day. I try to make it as enticing as possible, so this morning I made garlic bratzky and toasted some baguette: 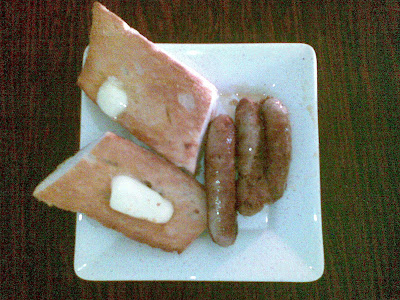 It was good but it was still a chore for me.
I was also thinking...stomachache aside, they say that the best weight loss success stories are those with breakfast thrown in somewhere in the equation. Maybe, just maybe, eating breakfast (more than tons of espresso, that is) will help me in more ways than one! ;)