Caramoan Debrief: Getting There

January 02, 2010
Getting to Caramoan was not as easy as I thought it would be. I guess I should have been ready, but I didn't really pay much attention to the details. Still, it was not that bad. I already posted something about having to be carried by porters to get on the boat. Before you can get there, though, you have to fly to Naga City in Camarines Sur. The flight is a really short one if you're coming from Manila (40 or so minutes). The thing is, the plane is smaller than usual - check out those props. 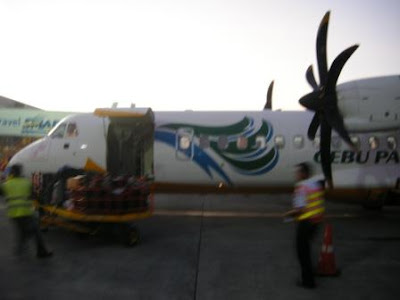 Once you get to Naga Airport (which is actually located in Pili, outside of the city), you need to find your way to Sabang Port. This trip will take about 40 minutes to an hour. Your choices are:
Whatever you do, PACK LIGHT! You'll be thankful for this especially if you have to take this mode of transportation: 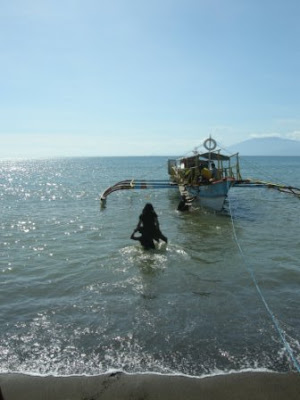 Once you get to Sabang Port, you'll need to get to Guijalo Port in Caramoan. The boat ride took us a little over an hour. Be prepared to wait for a long time for the boat to get full, though. 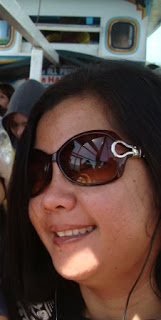 I was able to recover soon enough to pose for that pic.
Guijalo Port, unlike "Sabang Port," is a real port. 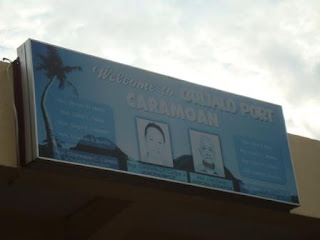 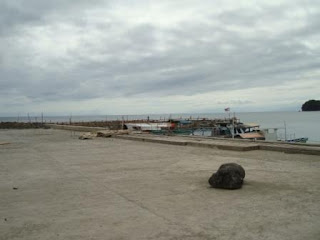 The boat ride from Sabang to Guijalo costs PHP120. You'll have to give a "tip" to the guy who carries you - the locals say PHP20 is enough, but feel free to give more, especially if you weigh as much as I do. :p
At Guijalo Port, the resort multicab (a small truck) was waiting for us - thank God! The trip was quick, if not comfortable. The roads were pretty rough, especially as we got nearer to the resort.
As of this writing, I know of only three resorts on the beach - La Playa, Breeze and Waves, and Gota Village. There are other inns in the town (Centro), but I suggest you don't stay there as it is a waste of time and energy to travel to the beach everyday. More on the accommodations next time...
So is "getting there" worth it? Check back in the next several days as I share more about the trip...merely writing about getting there has exhausted me.
Reactions: