July 04, 2009
My MSI Wind U100 (otherwise known as Koryu) is my lifeline. When I got her almost a year ago (a week short of a year, to be exact), I was beside myself with excitement. Since then, she has never really given me problems. That is, until last month.

I am pretty sure that I posted something about Koryu's screen going gaga on me. Jerry immediately brought her to the MSI service center in Cubao and they sent her back 4 days later. The weird thing was that the technician said that NOTHING was wrong with her. They didn't see this: 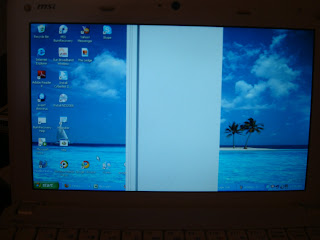 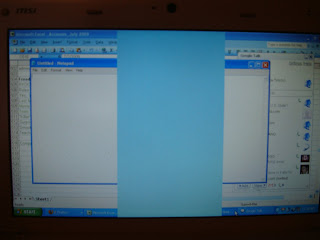 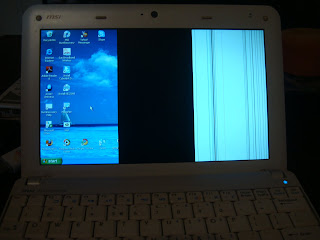 I was perplexed because I KNOW I saw this: 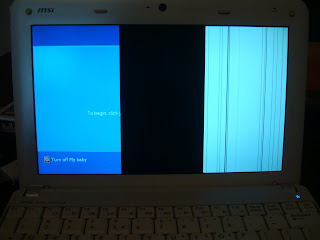 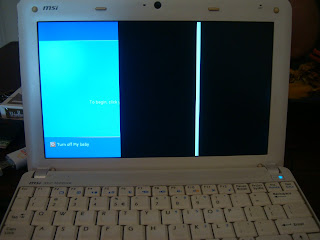 I couldn't use Koryu!!! But when I got her back, there was no problem so I contented myself with using her again.

Then it happened again. The very same thing, in fact. Those pictures above were actually taken the second time it happened. I decided to take pictures just in case the technicians don't see anything again.

True enough, when Jerry got to the service center, Koryu was working just fine. Good thing I took those pictures! So Jerry showed the camera to them and they said okay, we'll check her again, replace the LCD panel, and pick her up on Saturday.

So there I was early this morning, dreading the day for several reasons.

One, I hate going out.

Two, I don't even know where I was going! Jerry has been there twice but he couldn't go with me because of football practice.

Three, my tummy has been acting up because of one of those pills I am taking.

Four, what if they couldn't fix Koryu?

I had no choice, though. So off I went to Cubao to pick my baby up. Everything went perfectly! I found the place with no problems at all (I followed Jerry's directions to a T), was told that they replaced the LCD panel AND the motherboard, tested her, and went home.

Now my baby's pretty much like brand new. I can see the difference in the screen very clearly.

Anyhow, my main reason for writing this post is to figure out what happened to my Wind. I have been searching the Net for people with similar problems but I haven't found any info. The girl at the service center just told me it was the board and LCD, but wouldn't expound. So has anyone had this kind of problem? Any info will satisfy my curiousity.

As for those who need to get in touch with the MSI Service Center here in Manila, they are located at