March 14, 2009
Bohol is best known for being home to those little critters called tarsiers and the Chocolate Hills. For me, though, it will always be the place of mind blowing beaches. So how can you enjoy this experience yourself?

An alternative way of going to Bohol is to fly into Cebu City, and take a fast craft (ferry) to Tagbilaran. This is actually what we did, since I bought our airplane tickets to Cebu in December. Our original plan was to go to Camotes Island off the coast of Cebu, but this fell through, so we decided to go to Bohol. I know that there are several ferries plying the Cebu-Bohol route but I got my tickets from SuperCat, a sister company of SuperFerry. You can buy your tickets in advance from two outlets here in Manila - 2Go at the People Support Building in Ayala and at the Pier. A one-way ticket costs PHP500 per person, but they have a promo right now that if you buy a round trip ticket, you only pay PHP600 (or something like that). You can also check out Weesam Express, if you cannot get SuperCat tickets.

Once you get to Tagbilaran City, you can go to the beach resort of your choice.

What to do
This one's a no brainer - HIT THE BEACH!

Seriously, though, aside from the beach, there are some tourist spots that you have to visit when in Bohol. What we did was rent a car and a driver to take us around for one day. Your hotel or resort can arrange this for you. I got a tip from a friend who goes to Bohol on a regular basis, though, and he gave me his contact there. The agency charged us PHP3000 for 8 hours, which was more than enough to visit the places I wanted to go to. If you need the number, leave a comment and I'll give you her number. 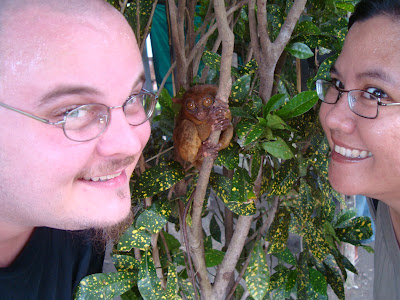 These cute things are the main reason we went to Bohol. Every Filipino child learns about them in school, and I have been wanting to see a real one ever since I can remember. I heard that the "official" tarsier conservation area is not open to tourists anymore, as the animals have been getting sick due to tourism. No wonder! These are nocturnal creatures, and the countless tourists snapping pictures during the day are not helping.

I really felt bad about the tarsiers, after visiting one of the many roadside stands which house them. I asked the guide if they were legal - they were just makeshift establishments, with little trees as the tarsiers' home! He said that they have DENR permits.... Maybe the government should be stricter regarding this. Considering that the tarsiers are endangered, tourism must be curbed to keep the tarsiers in better condition. One idea would be to make it a rule to visit the tarsiers only at night, to adjust to their sleeping patterns. What do you think? 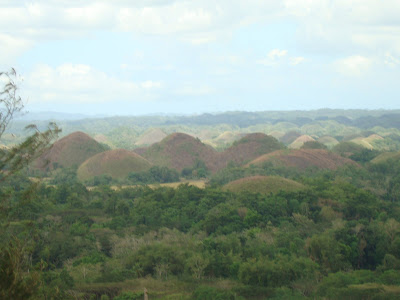 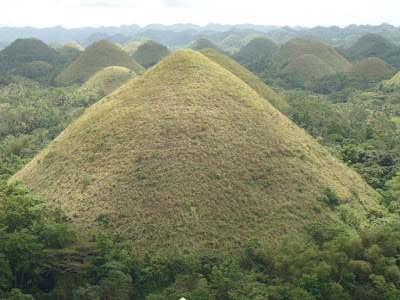 Another thing that all Filipino children learn about in school - these little mounds of earth that look like chocolate. I found out that they are not so little after all! I barely made it to the top of one (and we even rode the car most of the way), but the view up there was amazing. 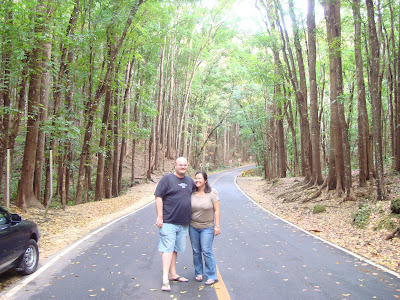 I hadn't heard about the forest until the guide told us about it. I think it is a reforestation project of the government. It is a beautiful place with countless mahogany trees. 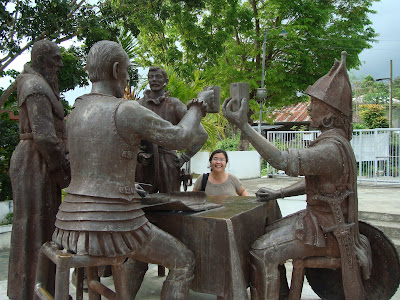 This site really embarrassed me - not because of the monument, not because of history, but because of my ignorance. I know that we studied this in grade school but when Jerry asked me what it was for, I simply couldn't answer!

Thank God for Google...This is what the Blood Compact was all about, courtesy of Bohol.ph:

Also at Bohol, Legazpi was given a hostile welcome. From his Malay pilot, he learned that this hostility was due to marauding expeditions of the Portuguese. Coming from the Moluccas, the Portuguese raiders traversed the Visayan seas, and just a few years before, in 1563, had plundered Bohol and killed or enslaved about one thousand of its inhabitants. Of course, the Boholano's easily mistook the Spaniards for Portuguese.

Again with the help of his pilot, Legazpi explained two chiefs of Bohol, Datu Sikatuna of Bool and Datu Sigala of Loboc that they were not Portuguese, and had come in peace, and not to plunder or kill. This convinced the Kings to end their hostility and enter pact of friendship. On 16 March 1565 (or 25 March, records are confused due to the Gregorian calendar reform in 1584), Legazpi and Sikatuna performed the now famous blood compact, probably not far from the modern town of Loay. This event is still celebrated in Bohol every year in June with the Sandugo ("One Blood") festival.

I knew it was for peace! 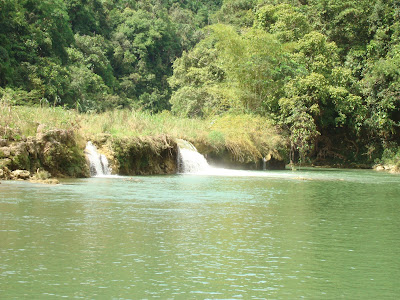 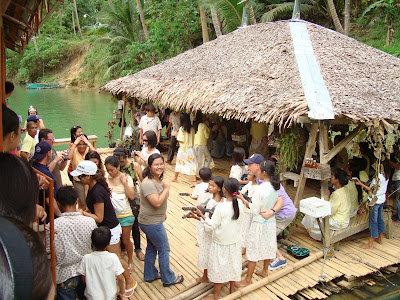 The Loboc River has this emerald green color - I thought it looked dirty but the locals will swear by its cleanliness. It reminded me of the River Kwai in Thailand, only much smaller. We had lunch on one of the many river boats. A buffet lunch for one costs PHP300. Not bad. The food was okay (nothing spectacular but good anyway) and the experience of floating up and down the river and watching some kids perform was fun. 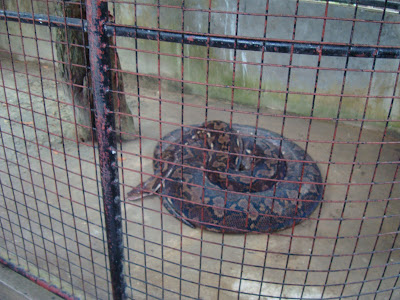 This python is supposed to be the longest and biggest snake kept in captivity. I abhor snakes. They freak me out, but Jerry likes them so we went to take a look. You have to pay PHP5 to enter the backyard - yeah it's kept in a cage behind the owner's house. There are other animals there - birds, monkeys, etc. And there is this stupid sign that says "The animals are stressed when you take they pictures, so to be fair, leave a donation."

I have never seen a stupider sign than that! And the she-male manning the gate of the python cage repeating "be fair" didn't help my mood at all. (No offense intended, but that person was just irritating.)

Those are the places that we visited. There are actually more - the Bohol Bee Farm, the Baclayon Church, some cave (I forget its name), Alona Beach, etc. I was dead tired by 4pm, though, and I couldn't force myself to go to the other places. We did pass by the Church and the Bee Farm but we didn't stop.