February 10, 2009
My weekend did not start out very well - it started out really badly, in fact. We had been planning on the weekend trip to Baguio for a month or so and we had really been looking forward to it. That morning, however, Harvey (our truck) decided not to start. I think his battery got discharged or something. Since both Jer and I had to go to work, we were not able to have him fixed during the day.

And things just got worse...let's just say that my day at work turned out to be full of "dropped bombs." 'Nuff said.

So I hurry home around 9 or 10 pm, hoping that Jer had Harvey fixed since he got off work at 6pm. BUT NO! He was not around, Harvey was sitting out front, and his mobile phone was off. You can just imagine how mad I was getting...bad day at work, dead truck, missing husband, cancelled trip?

I had given up the trip for lost. Then Jerry came home around midnight - apparently he had a beer (more like a case) with a coworker. Despite my mood and worries about the truck, he said that we should go. How? He pushed the truck and I popped the clutch. After 3 tries, a neighbor helped us push and we got Harvey running.

Then came the scary-exciting part: We could not turn the engine off till we got to our destination - Baguio.

Baguio is a city in the mountains, about a 6-hour drive from Manila (our friend made it in 3 hours in his Z3 Roadster, go figure). It was built by the Americans who dubbed it as the Summer Capital of the Philippines. For more info on Baguio, visit GoBaguio - a very informative site where I got my directions from (I have been there countless of times but I never really had to be the navigator).

Anyway, we made it as far as Shell on Julia Vargas, where we had to top up and turn the engine off. Harvey wouldn't cooperate and the gas boys had to push again...embarrassing huh? From there, though, it was all smooth sailing. We stopped for coffee and food a couple of times (NLEX and Tarlac) but left the engine running and we made it to Baguio at around 7:30 in the morning. 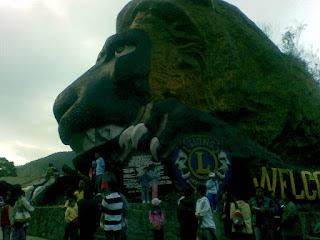 That's the lion that is a must-stop place for every tourist to the city. Obviously, we didn't stop. What could be worse than having to push the truck up a mountain? 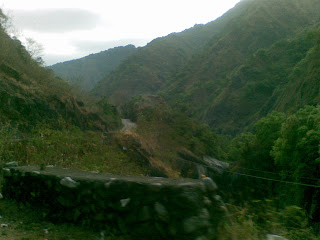 Then the fun part began. You see, my friend Donna texted me about her wedding and the arrangments months ago. She was the one who made the reservations for the hotel as they had a tie up with them. All this time, what I understood was that we were staying at the Manor Hotel in Camp John Hay. We found it easily - it is, I think, the best in the city. Jer and I were so excited when we saw the building - it was so beautiful and we were so tired, we had been up for more than 24 hours then.

Imagine our irritation AND embarrassment when we walked up to the extravagant lobby (we were in our laidback clothing by the way) only to find out that we had no reservations! Apparently, something went awry in our communication - we were supposed to stay at the Baguio Country Club and not The Manor. Jer and I were so tired already, though, and we were ready to check in at The Manor, prices be damned. They had a superior room available and we just really wanted to stay there. However, we got on the phone with our friend and our rooms were waiting for us at the Country Club - or so we thought.

When we arrived there - both of us grumpy already - it turned out that they couldn't arrange an early check-in for us since they were booked back-to-back. The earliest we could check in was at 2pm and the wedding was at 3pm...On to breakfast. Country Club food is known to be the best. Well, don't believe whoever says that. Jerry had bacon and eggs and I had sausages. For the price, the food was NOT worth it. And their fruit juices were powdered! 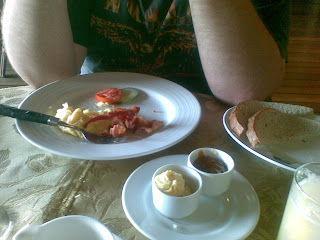 See how much food you get? That was really disappointing but what could we do? Their service was excellent, though. Since they knew we were waiting for a room, they ushered us to the waiting lounge where we were offered pastries, coffee, and tea. Both of us were so tired, though, that before long, we were snoring away. 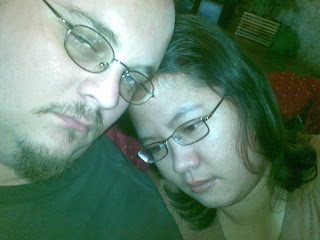 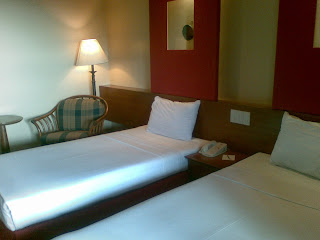 As you can see, we got twin beds, which we normally wouldn't get but hey, we were sleep deprived and had just come from a 6-hour drive. ANY bed was more than welcome!

Then I discovered that I left Jerry's shoes at home.

He was wearing leather slippers. We were supposed to go to a formal wedding. Jerry was asleep the minute we got into the room. What to do? I rushed over to SM Baguio, hoping that they would have shoes that fit. If you have size 11/12 shoes, you would know how hard that can be here in the Philippines. Luckily, the sales people were very nice and helpful and despite my asking to look at 10 different pairs, they helped me with beaming smiles. Even more luckily, the shoes I got fit Jer perfectly. 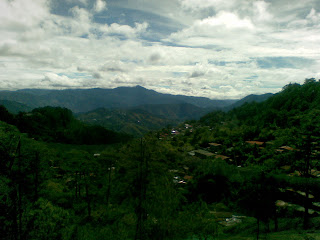 And so we made it to the wedding. That's the view from our balcony, by the way.

It was a very beautiful wedding and it was great to see friends from college again. Despite the fact that I broke the heel of my right shoe - yeah, what else could go wrong, huh? - we had a grand time. 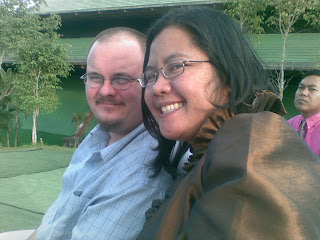 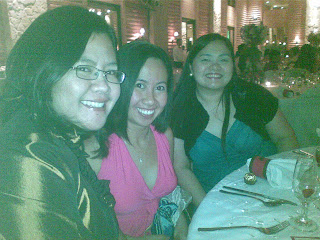 We didn't make it to the end of the reception party though, as the beds were calling our names. I think we fell asleep at 10 - there went our plans to paint the town red that night! We didn't really get to rest, though, as Jer's mom called us around 2 am to tell us that his grandma just passed away. I felt really bad for Jer as he cannot really do anything as he is so far away...he took it quite well, though.

The next day, we went around the city - literally. We didn't really know our way around so we found ourselves going in circles a lot, but it was fun. The people there are SO friendly. Can you imagine drivers actually giving way to other cars??? Oh, and we got our own police escort to Minesview Park. We asked some cops how to get there and it turned out that they had people going up there so they guided us. 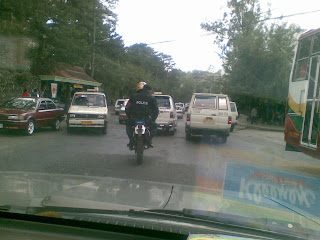 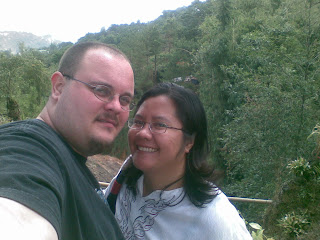 At Minesview - the horse with pink hair was right in front of us but you had to pay to have your picture taken. I didn't feel like parting with 10 pesos. :p
We also went to the most unique Starbucks I have seen. 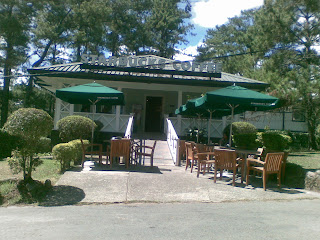 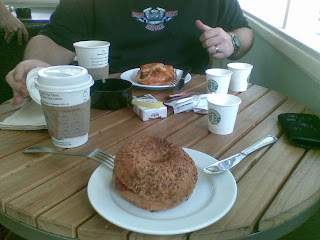 It was really pretty but - Murphy's Law again - their espresso machine was broken and they didn't have anything but plain brewed coffee. A Starbucks without lattes...*sigh*

This post may have been 80% complaints but we really had a good time. We would probably go back soon - this time for a more relaxed stay. Anyone up for a road trip?