Food and Shopping in Subic

January 05, 2009
Our first impression of Subic?  Blah...
I guess we just heard so much hype about the place that we were expecting to be wowed.  We were more in awe of the excellent roads leading to it!  After we settled in for the day, however, the place kinda grew on us and off we went to look for food and things to buy.
Now that didn't start off well because Jerry was in the mood to walk and decided not to drive.  He wanted to get cigarettes first and guess what, there was not a single 711 in sight!  He remembered seeing a Mini Stop on our way in - "Oh, it's just a block away."  The one block turned into 6...and you know me, the most I walk everyday is the distance from my desk to the pantry.  We made it to Mini Stop although Jerry had to stop me from hitching a ride every 5 minutes or so.
From there, he wanted to "explore" more so we went around looking for the duty free shops.  I suppose that walk was worth it - he found Miller Lite! Background: this is his favorite beer and he has been looking for on since he got here more than 3 years ago.  His first bottle of ML outside of the US was in Bourbon Street Bar in Thailand - 3ooPHP a bottle!  So when I spotted the familiar bottles, you can just imagine his glee.  Needless to say, we came home with a case.  For myself, I found Asti Spumanti on sale (buy 1 take 1 for less than PHP1000!) and some Malibu Rum (pineapple, they were out of coco).
Aside from the alcohol, we were able to get some stuff that we don't normally see in SM or Shopwise. I am not so sure if we saved money, though, as most of the prices were in dollars and we had to convert to pesos.  I wouldn't mind going back there for some shopping every now and then. 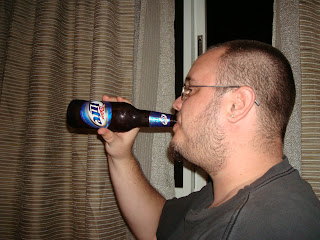 Jer's first swig of Miller Lite in a year or two...
Now for the good part - food.  There was this restaurant called Seafood by the Bay (imaginative, huh) in front of the hotel so we decided to eat there since we didn't see any other place which had potential.  Well, there was Pier One but we have that here in Manila.  We ordered tuna belly, blue marlin, and tiger prawn - all grilled.  We also got some rice and seafood soup.  The grilled seafood was ok and surprisingly, the tuna was so much better than the marlin.  I think the marlin was not very fresh as we both got a little ill after dinner.  The service really sucked - the waiters frowned at us every time we asked for something.  Maybe it was because we kept asking for little things like water, calamansi and soy, and so on...oh well.
Oh, and the seafood soup?  It was supposed to be an appetizer but it was served for dessert.  Go figure! 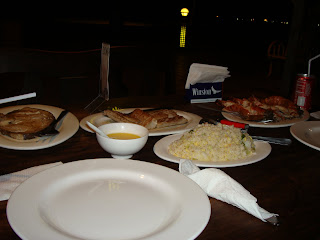 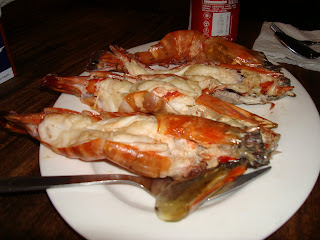 Perhaps the best place we ate at was Xtremely Espresso (not sure about the spelling), which we stumbled upon on our way home.  The hotel had a free breakfast buffet, which was decent enough, but they only had instant coffee so that didn't do much to wake me up.  We saw the coffee shop right beside Mocha Blends so we decided to stop and get a cup or two.  When I saw their menu, I just wanted to order everything on it!  Unfortunately, I just had all the scrambled eggs I could eat, plus ham, chicken adobo, hotdogs, and all the other stuff they had for the breakfast buffet at the hotel so I decided to get dessert.  And boy, was I happy!  Take a look at this blueberry crepe. 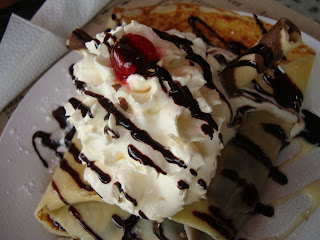 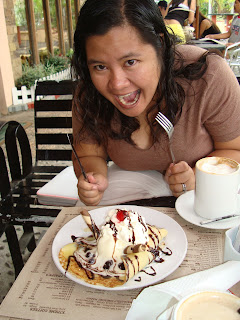 Can't wait to dig in! 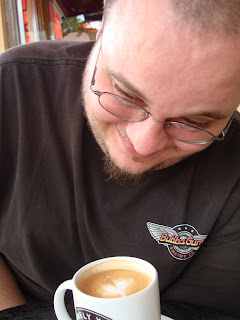 My coffee has a heart...I just want to drink it, quit taking pictures of everything! 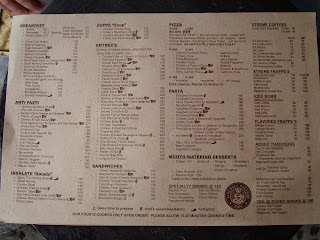 The menu at Xtremely Espresso
After my coffee and the crepe, I was one happy camper, ready to take on the road south once again.  I had to take this one last picture before we left. 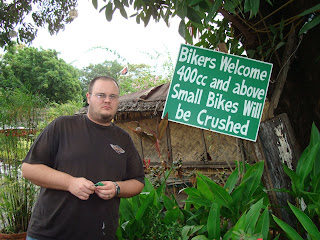 One of the funniest signs we've ever seen.