November 30, 2008
Went out with "the girls" last Friday night. We stayed at Pasto because it was too noisy in the center of Eastwood. (Ok, fine, Ren wanted to go there so that's where we went.)

Food and drink - quite good actually. They have this promo wherein you can get 3 cocktails for PhP195 and 3 beers for PhP125. I liked the frozen strawberry margarita and their pina colada. They tasted quite good but there was not much alcohol in them. But then again for the price, it was not bad. For munchies we had crostinis with spinach gorgonzola dip and some pasta.

Anyway, one of the highlights of the night was when Am spotted Sepultura (I feel compelled to explain who they are since the people I have been telling about this have only given me blank looks), the Brazilian band. At first we thought she might have been wrong but she turned out to be right! And they actually got the table beside us!

We were all chickenshit though. I really wanted to have our picture taken with them but "I don't do that sort of thing." YEAH RIGHT. I ended up dreaming about the band all night. Talk about lame!

Ren got a couple of pictures while they were still standing at the corner before they sat down, though. 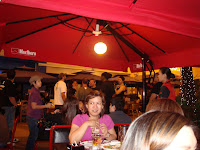 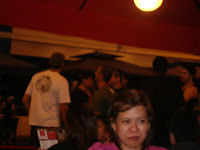 You gotta click on those photos to even see their faces. :p

Here are some more photos - this time of us. 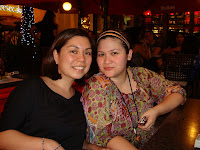 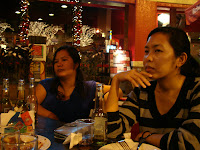 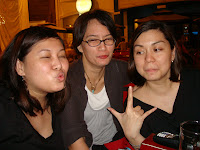 Don't ask me what they were doing.
Reactions: