Blame It On Mercury 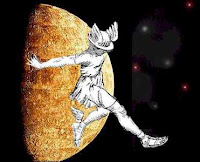 We were eating dinner in the pantry earlier when Livi mentioned something about Mercury in retrograde and how it is affecting electronics and other things. It was the first time I heard about such a connection but here is what I read from another blog about Mercury Retrograde:

While people speak of Mercury Retrograde, periods that screw up computers and television sets, today's astrologers believe the mishaps happen in more personal realms (Uranus is the planet that rules television and computers). Mercury rules communication, but more informal communications, like writing, speaking, short shopping sprees and other erranding endeavors.

So, while Mercury is Retrograde, don't give that party, be extra aware of what you say and what you interpret when chatting with or writing to friends, cut back on errands, expect that the check will be in the mail longer than usual.

Since the car is usually used for shopping and errands, don't be surprised if the battery wire loosens or the fan belt snaps just when you have rush out for that one ingredient you forgot to buy.

The good things to do when Mercury is Retrograde: meditate, contemplate, edit the book/poem/song/essay you've been writing, clean house, talk to your pet, listen to music, paint, catch up on sleep!

I am not the superstitious kind and the piece above is a bit on that side BUT I have been having problems with communication (interpersonal) this week. People acting dumb (or maybe they really didn't get it), people misunderstanding I say, me misunderstanding what others say, me suddenly ranting...

I choose to blame it on Mercury and its reversal...