Don't You Dare Say It Wrong!

September 24, 2008
I can't get over how Jerry criticizes foreigners for pronouncing Tagalog words the wrong way. A couple of years ago, we went to watch a WWE show at the Araneta Coliseum. Mick Foley (I think that's his name) had a short speech thanking the audience for coming out to see them. At the end, he said "Salamat po!" That's the Tagalog phrase for "Thank you."

My Filipino (at least he seems to be one sometimes) husband suddenly yelled "It's sahlahmat po! NOT salaymat po!"

Today, we were watching CSI and the guy said "It looks like balut. It's a Filipino delicacy." He pronounced it as "balot."

Husband: "It's bahloot!!! God, it's so irritating when they say it wrong."

Be careful how you say Tagalog words around him. He's the expert. ;)

By the way, if you are wondering what balut is, it is the fertilized egg of a duck. It is boiled and eaten with a bit of salt. I have to admit, it is quite gross - I can't even eat it. Take a look for yourself. 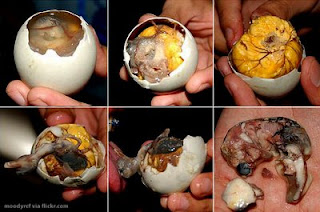 By the way, balut is supposed to be an aphrodisiac.