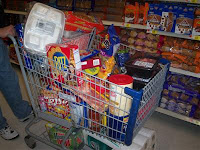 We just got home from doing our bi-weekly grocery shopping. We usually alternate between Shopwise and SM Hypermart. Shopwise is nearer and I normally like their selection of meat better. They also have the imported soups, snacks, and other items that we buy from time to time. SM Hypermart, on the other hand, is a bit farther but has better vegetables. The prices there are also cheaper.

Or so I thought.

I was amazed - I am amazed - at how much we spent on relatively few things. Since we still had a lot of meat in the freezer, I bought less than half of what we usually buy. I didn't even get beef. My grocery list today was about half of what it usually is.

So I was waiting for my turn at the counter, thinking happily that the bill wouldn't be so much. I was wrong. We went over the grocery budget by more than a thousand. If that wasn't bad enough already, the stuff we got was fewer than usual.

Now I really am feeling the crunch of the times...
Reactions: