August 16, 2008
We were not really planning on going out this weekend but we went anyway. After all, it was for a good cause. Last week, we heard about a young woman named Tara who got shot in the head while riding a jeepney on the way home. It was the eve of her birthday. A man held her up in the jeep, grabbed her bag, and shot her. She is still in the hospital and is fighting for her survival. Her friends have organized a series of concerts to help with the medical expenses. 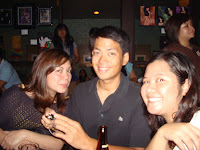 She was Angelique's student at Assumption and when she asked us to go to the gig tonight, we decided to drop by for a bit. We only got to watch one band (Matilda) but we had a fine time hanging out with Angelique and Bruce. Jeannie, a colleague, was also there.

Anyhow, the whole thing got me thinking. I know that the city streets are not 100% safe, especially at night. Still, it was not this bad a year or so back. We have always had robberies and muggings. Heck, Jerry was even mugged in Makati. However, people didn't normally get shot. People didn't kill for money.

Just the other day, we were watching the news and we saw a woman who got killed when an FX was robbed. Is the situation in the Philippines really that bad?