Much Too Young To Feel This Damn Old 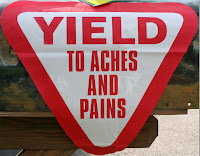 Country music lovers would probably recognize that line from a popular song (which I had never heard of until Jerry introduced it to me). This is exactly how I have been feeling for the past few days and I don't understand why. I guess I really am getting old.

We have not been getting much sleep for the past weeks and I have been feeling like shit. And even if I wake up at noon, I don't feel any better. Maybe it's because we've been going to bed early in the morning?

Now, I have to make sure that when I go out during the week, I have to go home around 1 or 2. Otherwise, I would be missing out on a day's work. Tsk, tsk, tsk.

I don't want to be old and boring!!!
Reactions: