More than a "Wii" Bit of Fun

August 03, 2008
I have always thought that playing with the Wii would be fun but I didn't realize just how much fun it was till I actually tried it last night at Ren's. We held one last get together for Earl - Cranium night. Before everyone arrived though, we fiddled with the Wii and tried Mario Kart, boxing, and tennis. 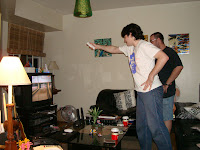 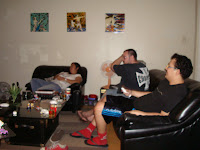 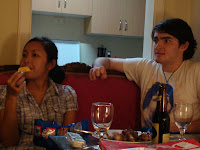 Boxing was so much fun and it really wore me out! I think that watching Jerry and Earl was even more exhausting though - watch and you'll know what I mean. Ren and I were so cracked up we could barely talk!

We also played the Wii version of Cranium - it's called Kabooki. The guys won simply because they got the easier tasks (and perhaps because of the fact that they figured out how to work the controllers better than we did). We then switched to the board game version and the girls beat their butts - twice. 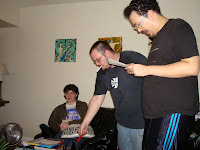 These guys are so competitive!
You won't believe how competitive the guys were - there was even a moment of tension when a guy and a girl had a heated exchange. ;) It doesn't matter now because we won and had fun, too!

Now I really want a Wii. I sucked so bad at it and I think I need my own Wii console to practice with.