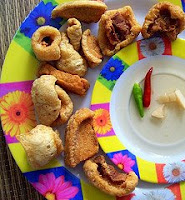 When I was a kid, my dad used to make chicharon often. I loved how he used the pork fat with bits of meat in it. Then I moved to college and discovered the "great" chicharon of Bulacan. It was basically the same thing that my dad made - "laman" and all.

For those who are clueless, chicharon is basically pork fat that is seasoned and then deep fried - pork rinds in English. Wikipedia provides more information:

Chicharrón is a popular dish in Andalusia, Spain, and Latin America and is part of the traditional cuisines of Bolivia, Cuba, Mexico, Venezuela, El Salvador, Dominican Republic, Nicaragua, Colombia, Panama, Brazil (where it is called torresmo), Peru, the Philippines and others. The singular form, chicharrón, is also used as a mass noun, especially in the Philippines where words do not have a pluralized form. They are usually made with different cuts of pork, but sometimes made with mutton. In Puerto Rico chicharrones are also made with chicken, in Argentina with beef, and in Peru with chicken or fish.

The pork rind type is the skin of the pork after it has been seasoned and deep fried.

So what prompted me to write this post? Ruy gave us a pack of that special chicharon from Bulacan and we are enjoying it this lazy (French holiday) Friday. It's probably not good for our tummies as we have not had anything to eat yet but I just can't resist this stuff!