West Side Story in Manila 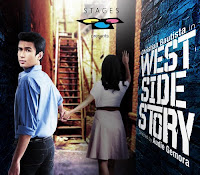 I am not a very "cultured" person but I do appreciate music and theater. Jerry, on the other hand, is not really into theater. That is why I had a bit of a hard time convincing him to watch Avenue Q with me when it ran last year. I hate saying "I told you so" but he did enjoy the show a LOT.

So when I told him that West Side Story is going to run here in September, I was not expecting much of a reaction. Needless to say, I was surprised that he was actually excited. As it turns out, he saw it when he was younger and he liked it.

Anyhow, if you are interested to watch it on its opening night, here are the details from Minnie Fong:

I am selling tickets to the opening night of West Side Story and a part of the proceeds from the play will be donated to Kythe (http://www.kythe.org), a foundation whose primary cause is children with cancer.

Touted to be the best musical of all time with music by Leonard Bernstein, lyrics by Stephen Sondheim and original choreography by Jerome Robbins, this exciting production will be headed by Christian Bautista who will be playing the role of Tony and Joanna Ampil of Ms. Saigon fame as Maria. She will be alternating with Karylle for this role.

West Side Story was first staged in Manila in 1982 with Audie Gemora as Riff and Menchu Lauchengco as Maria. The play is an intense, dramatic dance musical with many show-stopping numbers and immortal songs like "Somewhere," "Tonight," "One Hand One Heart," "America," and "Something's Coming." It will be directed by Menchu Lauchengco-Yulo herself and the Musical Director is Gerard Salonga (brother of Lea Salonga) so it's sure to be an awesome show. For those who are interested, here are the full details of the show:

Not only will you be enjoying yourselves, you will be contributing to a worthy cause! Send Minnie an e-mail for inquiries and do tell her you read about it here, please. :)

See you on the 5th of September!