Someone Glued the Scissors "Shut" 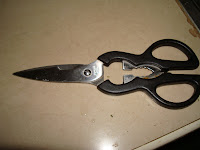 We have this really nice pair of kitchen scissors that my mom gave to us. Yesterday, I was making dinner and need to use the scissors when I got stumped - they wouldn't "open." I thought that maybe I was just feeling weak, so I tried again - harder. They still wouldn't budge!

I hesitantly called in reinforcements...The hubby tried once and then suddenly burst out laughing.

"I think I glued them shut because I cut the tip of the Super Glue to fix the fan and I didn't clean up...I'll figure out how to fix it."

All the while laughing at the whole situation. Despite my mood, I found myself laughing at him. I guess if there is one thing I can say about him, he can make me laugh despite everything that has been happening. That is a good thing, isn't it?