The Mystery of the Moth

July 12, 2008
It's been a lazy Saturday - we woke up late, there was a drizzle going on, and the sky was dark. We had originally planned on going to the mall to apply for wired Internet (Smart Bro woes for another post) and look at sub notebooks but we decided to stay in instead.

So there I was making coffee when a tiny moth caught my eye. It was on the wall opposite the dining table and it was just really beautiful. I took Garcia and tried taking a close up picture but it was all fuzzy - thank God for Macro Mode, which took me a while to figure out how to use. 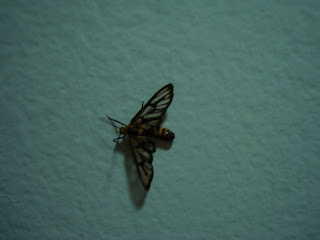 I wish I could have gotten a bigger picture but this was as close as I could get.

The moth stayed in place all afternoon and throughout the evening but in between watching Legally Blonde 2 (yeap, it's not me but it is a fun movie to watch) and preparing a late dinner, I suddenly noticed a black smudge on the wall and the moth MIA!

I eventually saw it on the floor. It had met the fate that most creatures of its kind meet - it got squashed. We don't know exactly how it happened. I thought that Jerry might have accidentally hit the wall but he said he saw me stumble and hit the wall earlier. I don't remember, though. Poor moth. Am glad I got it on picture while it was still alive, though. No pictures of the "after" - I still feel bad about it.