Let Me Take the Trash Down 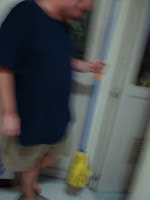 Don't get me wrong - I am not complaining BUT I am thinking that aliens had abducted my husband and substituted someone else that looks like him. Now why do I say this?

One, I have not had to do the dishes for a WHOLE WEEK.
(This is normally Jer's task but I usually end up doing them anyway because he hates doing the dishes. Since I went to the doctor last week to get her to remove *something* from my finger, though, Jer has been so diligent in doing the dishes. I'm not saying that he has not complained - boy, he HAS complained a lot - but he gets the job done.)

Two, Jer was on his way downstairs to get cigarettes a few minutes ago and he was at the door when he did an about face and mumbled, "Oh wait, let me take the trash down!"
(Again, this is his task but I normally have to remind him.)

Three, Jer actually took the mop and cleaned up the floor a bit.
(I think this is the third time he has touched that mop!)

That shot up there - it's blurry because I was in a hurry to take it before Jer let go of the mop.