July 06, 2008
I've heard of death by chocolate but death by cake? Well, I almost experienced it last night when we ate at TGI Friday's. You know by now that when I write about a dining experience, I normally cover everything from the appetizers to the dessert. This time, though, I'm going to cut through all the motions and go straight to the most astounding piece of pie that I have ever had. For details about the whole meal, do visit Jer's blog where I have a guest post.

So, what is this cake all about that you can die from it? We were actually done with the meal and were almost ready to go when I saw this small ad at the end of the table. The picture was just irresistible and knowing that it was Dulce de Leche, I knew that I had to have a slice.

Going against my nature, I ordered the cake without looking at the price. I still can't believe that I did that but all thoughts of not knowing the price disappeared when I took a bite of the cake. 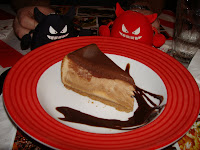 Just look at that thick layer of chocolate at the surface! The inner layer was so rich that, combined with the chocolate topping and the chocolate syrup, I thought I would have a heart attack-due-to-richness on the spot. I never thought I'd dub a cake too rich for me but I was wrong.

Oh, it doesn't end there. When we got the bill, I REALLY thought I would die by cake. That rich piece of cake cost PhP400!!! God, just thinking about it makes me hyperventilate yet again. 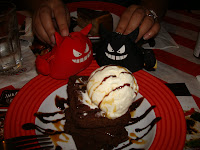 That's Jerry's brownie a la mode. Not as rich and better priced. I better end before I start getting worked up again.