June 28, 2008
I got us a new toy today. I was not really planning on it but after Sam's party, we took Dad shoe-shopping and when we said goodbye, we went around CyberZone to window shop. We saw a couple of things that we wanted. There was this 7-inch laptop that had 1G of memory and 60G HDD. I thought of getting it but decided against it.

Then we saw the God of War PSP bundle. We were gonna get it. Then we found out they wouldn't let us pay 0 interest on the credit card. We decided against it.

THEN we saw a Sony W-200 bundle. It came with a FREE photo printer, a FREE (extra) battery, a FREE 2G memory card, and a FREE case - 0 percent on my credit card. We couldn't resist it.

So here we are at home, with a new camera that I have been wanting for a long time. I named her Garcia, from the tech girl at Criminal Minds.

I haven't really played around with Garcia much yet as the battery charge is low but we got some pics at Mr. Kabab where we went to eat dinner after shopping. I'll write about that in another post. For now, here are the pics of our new toys - courtesy of my old trusty SE Walkman Phone. 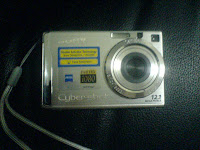 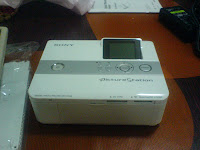 And the printer - no name yet.

Diana, if you're reading this, I finally got my Sony camera!