June 21, 2008
Shameless plug: Jer and I are trying out a business idea - we're selling Batangas coffee. For the uninitiated, Batangas coffee (kapeng barako in Tagalog) is from the coffee species coffea liberica. Wikipedia describes this species as:

A species of coffee that originated in Liberia, West Africa. The coffee tree grows up to 9 metres in height, producing cherries that are larger than the cherries found on Arabica trees. The coffee was brought to Indonesia to replace the Arabica trees killed by the coffee rust disease at the end of the 19th Century. The coffee itself has more in common, cupping wise, with Robusta. It is still found in parts of Central and East Java today.

A varietal of Liberica, known as Baraco, is a major crop in the Philippines.

So this is the coffee that we drink at home - we have a friend who is from Batangas and she gets the coffee for us. We all decided to try and make a business out of it. So there, anyone from the Philippines interested? :)

Look at how hard Jerry worked on repacking the coffee: 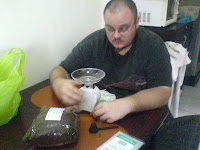