June 20, 2008
One of the things that Jerry misses the most from the U.S. is the food. He is a very picky eater and he only eats certain dishes. One of the things the always raves about is the Philly Cheese Steak. He talks about this place in Florida where you can get the best. We have tried a couple of restaurants here that serve Philly Cheese Steak but they were all disappointments. Even I was not impressed.

That's why we were quite excited when Jerry tried his hand at it the other day. He kept on making a disclaimer "It is not like the original one. It doesn't taste the same. There's something missing." But I think it turned out pretty good. Here's his recipe.

He asked the guy at the supermarket to slice the steak as thinly as he could but I think Jerry was not satisfied with the cut but he made do with it anyway. Jerry then seasoned the meat with salt and pepper. He cut the beef into small pieces and sauteed them. When they were done, he melted the cheese on top of them and then transferred the mixture to the heated baguettes.

He said that you are supposed to add other things such as onions and green pepper but he doesn't like that so this is what we got. 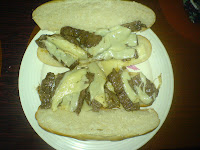 He made french fries to go with the sandwiches as well. 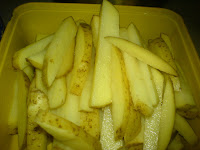 It was one of the best and heaviest lunches I have had. 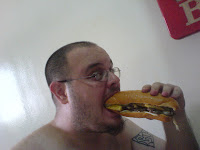