It's All About Karma 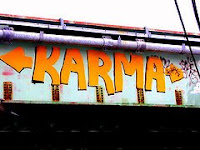 Since we're done with season 3 of Criminal Minds now, we have to channel our attention to something else during the weekend. We decided on starting with the first season of My Name Is Earl. It's a really funny series where this guy Earl decided to turn over a new leaf because of karma. He's this "really bad guy who never did anything good and expected good things to happen to him" - until he discovered karma. So now, his goal in life is to right all the wrongs that he has done, in the hopes that karma would reward him.

Though it is one of the most hilarious shows I have ever seen, it got me thinking about the principle of karma. We use the term all the time. I pick on a colleague and then later when I hit my knee underneath my desk and yelp in pain, she says "Karma is fast."

But what is karma, really? Is it something that is aligned to the Christian faith? My mom would probably say NO. Yet I have been thinking about it and basically, the concept of karma is "reaping what you sow." What you do now will come back to you later on, one way or another. Wait a minute - isn't there a similar verse in the Bible?

"Do not be deceived: God cannot be mocked. A man reaps what he sows." - Galatians 6:7

I suppose it is not right to say that karma is wrong. Or maybe I am interpreting things too loosely here. I don't know, I am just thinking aloud. But it does make a lot of sense to believe in this thing, doesn't it?