June 01, 2008
My Saturday nights are normally spent at home but Ren invited us to watch Joff play at Pino last night. Pino is a resto bar located at Maginhawa Street in UP Village. I have never heard of it so I looked it up on the Internet and found a blog featuring it. From what I read, it was worth a try and since Joff was playing anyway, we decided to go for it.

If you are familiar with UP Village, it is not hard to find. The fact that Joff was standing outside helped as well! ;) 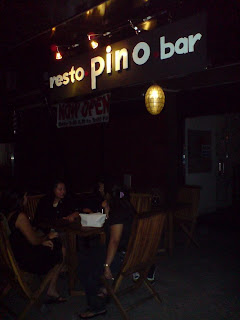 Anyhow, Jerry and I were starving when we got there so we ordered appetizers. The blog I had read somehow influenced my choice - I ordered the wasabi onion rings, Jer got an order of scallop and shrimp tempura, and Ren got kilawin shooters (raw fish in vinegar). I loved the tempura - hot off the deep fryer, the breading was crisp and the seafood tender. There was a hint of sweetness blended with spiciness. 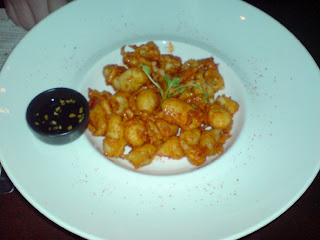 The wasabi onion rings were good except that I sorely missed the kick that wasabi adds to food. Nevertheless, we ordered another serving as we needed more. 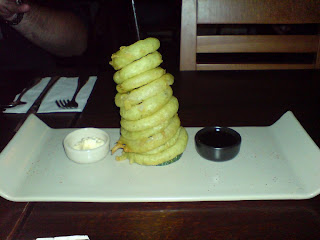 As for the kilawin shooters, I gathered the courage to try it. I am not a big fan of raw fish but they were all raving about it so try I did - and I actually liked it! 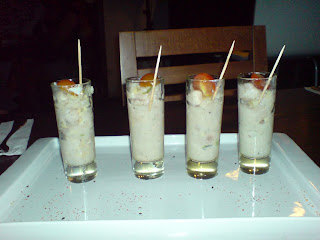 The prices were average - nothing more than PhP200, if I remember correctly. However, we were all still starving after we had the appetizers so we went on to order a real meal. I decided on the tomato aligue pasta - it sounded real good. Aligue is the fat of crab and adds a very rich flavor to anything you mix it with. By the way, it is also a killer when it comes to cholesterol - maybe that's why it is so good! 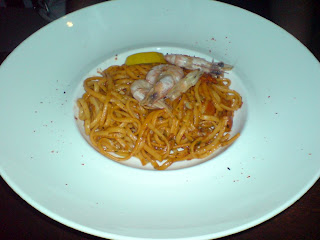 Anton and Am had chicken confit. I learned something new - confit means something is cooked in fat. In this case, the chicken was cooked in duck fat. It came with deep fried mashed potatoes - interesting concept, really. 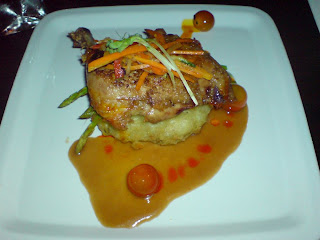 The price for the main course was a bit steep, in my opinion, especially considering the fact that the servings were not big at all. And the taste? I am sorry to say that I was very disappointed! The pasta almost had no flavor to it! The shrimp toppings were perfectly cooked but tasted like they were boiled in plain water. I could barely taste the flavor of the aligue as well. I tried the mashed potatoes that came with the chicken confit and it was just average.

On the positive side, the presentation of the food - as you can see in the pictures - was awesome. If the chef were competing in the Kitchen Stadium (Iron Chef America), he would probably get 5 points for plating!

The ambiance is something else as well. Pino is very small and cozy. The lighting is very warm and the art adds to the whole experience. Watching the solo artists perform was also a treat. I forgot the names of the other performers but there was this guy - I think he's called Spazz Kid (spelling?) - who played electronic music. I don't really like this genre but his music was quite good. Of course, Joff performed as he usually does and we were all entertained. 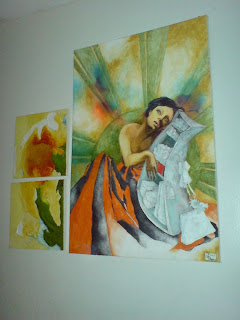 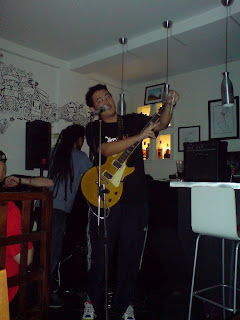 We capped the night off with a bottle of nice red wine, several order of fishballs from Sarah's (a local hangout for UP students), and then headed on home.

Maybe I should go out a bit more often.
Reactions: