Hotdogs Are Wrapped In Plastic???

June 10, 2008
Yeah I suppose you won't really know it unless you have been cooking hotdogs all your life (in the Philippine context). Jer was really hungry the other night and we were having a minor spat so I didn't really feel like cooking for him. So off he went to the kitchen and started making hotdogs and french fries.

"Uh, Jer, that's why it's called frying...you need oil to fry the hotdogs in."

I continued watching The Storm of the Century while working on the laptop. Happy somehow that he was learning to fend for himself.

"Noe, the hotdogs are done BUT there seems to be a plastic wrap around them. Is this the way it's supposed to be?"

I jumped out of the couch - I didn't know I could still move that fast - and couldn't help but double over in laughter. My husband fried hotdogs without removing the plastic wrapping.

"How was I supposed to know that you guys wrap your hotdogs in plastic???"

He does have a point. I managed to get this photo while laughing my butt off: 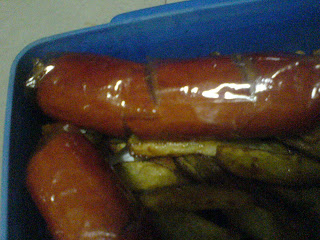 See the gleaming plastic wrap? It's a wonder it did not melt!