June 22, 2008
Earl dropped by the house around midnight. He's leaving in August and we haven't hung out in a while so when he and Jerry bugged me about going to R&J's to have bulalo, I said yes. After all, I also thought that it would be a good night to be eating a steaming bowl of that soup with the kind of weather we were having.

Little did we know that there was a typhoon.

So there we were, past midnight, prowling the streets of the city. It was not bad while we were out. There was some rain and a bit of strong wind. We had a good meal although we were a bit disappointed at the amount of meat in the soup. Normally, there was more. The flavor was still good anyway and we had a good time together. 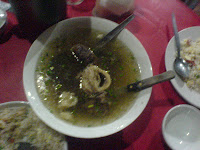 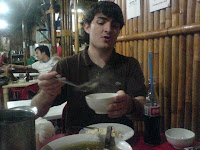 Earl getting himself some broth

Bulalo is a Filipino dish which is basically beef shank (with the bone and all) boiled for a very long time. The broth is very flavorful and the meat very tender, falling out of the bone. For some foreigners, the presentation turns them off but once they taste it, their minds change.

I remember the first time I took Jerry to R&J's. His expression was filled with wonder - wonder at why I would bring him to such a place. His eyes got even bigger when he the bulalo was served - he couldn't believe that I expected him to eat it. But as I said, the taste changes people's mind. It is one of his favorite dishes now. (He used to call it bone soup but now he calls it by its proper name - bulalo.)

Anyhow, we got home just in time at around 4 am. As soon as we got home and got settled down, the wind started howling like a pack of wild animals and the power went out. Apparently we were having a storm. It went on till late morning and needless to say, we weren't able to get much sleep. I was so anxious that the new aircon would fall out of its brackets because the wind was so strong. Jer was so excited because he loves watching storms so he went outside to watch while I tried to sleep.

Things are better now, the storm has moved on but our cable TV is out. There couldn't have been a worse time for this - the French leg of the F1 is on right now. :(

By the way, if you are in Manila and you haven't tried R&J's, you should head on over there. They are located along Boni Avenue in Mandaluyong, right beside Petron and across Chowking. They're open 24 hours.