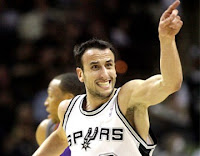 I didn't wake up in time to watch the tip off but caught most of the 1st quarter. Manu made back to back shots to cut the lead down to one! Looks like he is getting his game back! The Spurs' defense looks tighter and they are hustling much better. I really don't want to get my hopes up but they HAVE to win this game and the next.

[UPDATE]
End of the first half and it's looking good for the Spurs (49-39). Tim Duncan, Tony Parker, and of course, Manu Ginobili are playing like the stars that they are. Manu has made several 3 pointers already! I am hoping this continues till the end of the game.

[UPDATE]
End of the third quarter and we're still doing great at 69-57. Manu really is the fire starter of the team - no doubt about that now. He has made 25 points in 19 minutes!

[UPDATE]
Final score 103-84!!! Manu finally got his game going and everyone else followed suit. Justin proved to be right. I hope this holds through the next few games.