When I first heard of "the other side" of Puerto Galera, one of the things that stuck to my mind was Luca's. A colleague told me about this little Italian restaurant at the end of Talipanan Beach. He insisted that if there is one place we should eat at, it was Luca's.

Of course, being the lovers of Italian food that we are, we were hell bent on going there at least once. We were fortunate enough to have met friends on our first day at the beach - thanks to Jerry's extremely extroverted nature - and Jerry got them all excited about Luca's as well.

What we didn't know was that Luca's was quite far from Tamaraw Beach, that is if you take the road, which we did. I imagine that it would have been easier and faster if we could have walked on the beach but there was this huge boulder in between Tamaraw Beach and Talipanan Beach. So, unless we wanted to swim around it, we had to take the road. Anyhow, the resort offered their van. Since there were 8 of us, the PhP400 fee was not bad. I am glad that we didn't take the tricycle as we originally planned. The last part of the road was VERY rough. I don't think a tricycle could have taken us all the way!

So what about the food? Luca is Italian and according to him, he has found his place in this world - in Talipanan. I am just glad that we found his little place on the beach - the food was fantastic! I would have to say that it was the best Italian meal I have ever had in my entire life! I love Avenetos but it is nothing compared to Luca's pizza and pasta.

The funny thing was that in the beginning, Luca didn't seem too friendly at all. When we first got there, there was a bunch of men at a table. Jerry and the other guys approached them and asked if they knew where Luca was. This guy shrugged asked them who they were. So introductions were made and it was only after a few minutes of chatting that they guy said, "I'm Luca." Hmmm... 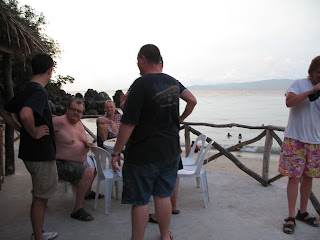 It doesn't matter - he was friendly enough to make baked ziti, which was not part of his menu. Not only was it delicious, the servings were so big that we were able to take home some of it! 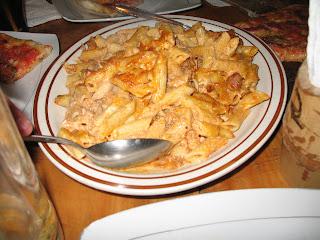 I think the dish that I liked most was the seafood marinara, though. (Thanks, Moncho, for ordering it!) 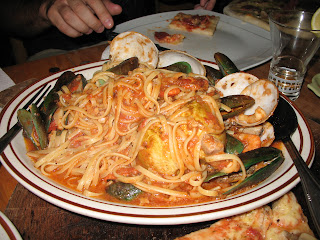 The stromboli is something else as well - I will forever be comparing it to Fazoli's (which is the nearest place I can get stromboli at). 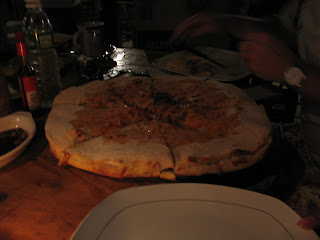 Sorry about the lighting - we had to turn the lights off due to the insects!
Oh, and it was at Luca's that I had my first taste of grappa. I have heard of this drink from my Italian learner but I never thought that it was going to be that potent! Moncho, our new friend from Spain, bought us all a round of grappa. I was so embarrassed because I was not able to finish mine - lightweight! 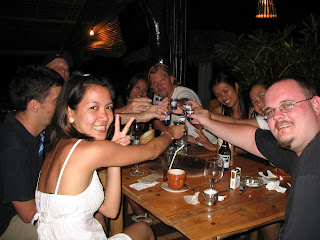 Was there anything negative about our experience at Luca's? Nothing with regard to the food. We could have done away with the insects that came in droves when darkness fell, though.