May 12, 2008
I had my doubts about going to Puerta Galera for this vacation but time and financial constraints didn't leave us with too many choices. As it turned out, it was one of the best vacations we've ever had!

We stayed at the Tamaraw Beach Resort - found it on the Internet and was subsequently recommended by friends. The beach is located in between two other beaches - White Beach (the more popular location in PG) and Talipanan Beach. The sand is not white, but neither is it black - let's say that it has a brownish hue. The waves were relatively huge, especially when compared to Boracay and Baras (in Guimaras). The resort itself, though, is something to be quite happy about. (more about this later) 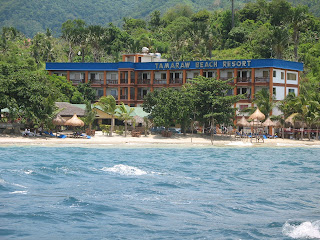 First view of Tamaraw Beach Resort
So how did we get there? We took a bus in Cubao - the bus station is behind Ali Mall. Christene, a friend from work, suggested taking the bus line Alps. It took us directly to Batangas Pier and the bus ride took about 2.5 hours. It would be faster if you had your own car - they have secure parking at the pier. The bus ride cost us PhP153 per head.

Upon arrival at the pier, we were quite surprised at how nice and modern (relatively) it was. It actually rivals some of the provincial airports that we have! Unfortunately, there does not seem to be much of a difference when it comes to keeping to the schedule. We had to wait for about an hour for our boat. It wouldn't have been so bad had we not been starving (we left at 5.30am and the boat didn't leave till 10.30am). 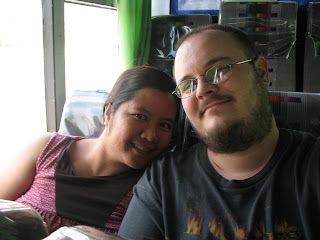 On the boat
If you want to go to Tamaraw Beach or Talipanan Beach, you should take the boat line we took (Commandos) as they can take you there directly. The other lines go to White Beach only. I liked how everyone got off at White Beach, leaving only Jer, myself, and another girl - in my mind, that meant no people at Tamaraw! (As things turned out, we made friends with that girl -again, more about this later). By the way, the fare is PhP250 per person, one way. They can also pick you up at the same beach for the same price, just let the people at the resort's reception area know.