Not So Pleasant Banana Leaf

April 16, 2008
I have been meaning to write about Banana Leaf since we ate a couple of weeks ago but I just didn't have the time. Anyhow, that was the day I hung out with Hannah and Nikki at The Block. The husbands were supposed to be there but everything turned out perfectly as we had time to relax with each other.

After watching the U2 3D movie, we were starving as we hadn't had lunch yet. So we went around looking for a new place to eat at. The Banana Leaf caught our attention as we had not tried it yet and it seemed like a promising place - they specialize in a fusion of Asian cuisine. I was particularly excited by the Hainanese Chicken, which is one of my favorite dishes. It was very disappointing to say the least. The half chicken was more like half a breast: 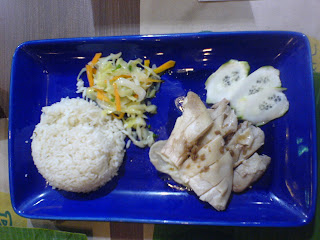 For almost 300 pesos, it was certainly not worth it! The chicken itself was fine - tender and not dry. The ginger dip that went with it was awful, though. The texture was mushy and the taste indescribable.

I am not the only one to be disappointed - Cowlicks shares some pictures in her blog.

In fairness to the restaurant, their flat bread dipped in condensed milk was good. I forget the name - sorry about that. I was just overwhelmed with disappointment because of the chicken. If you ever come across Banana Leaf, I suggest that you go somewhere else.