June 12, 2011
The evening started out to be promising enough. I had been craving Mexican for a month or so, and there is this restaurant at The Fort that I'd been hearing about for while. So off to The Fort I went.
First stop, Gourdo's. Monin syrup, Barilla, and other cool stuff awaited. Then again, their stock has dwindled since I last went there, so it was not anything special. I was just glad that I was not one of those queued up at the NBC Tent for the Crocs megasale. It was late afternoon and the line was still longer than a whiner's litany of complaints.
With the help of Google Maps, I set out to walk to Ristras, this Mexican restaurant that has been recommended by friends. I had been meaning to visit it since I first heard about it and the few reviews I saw on blogs were positive as well. My tummy was rather excited about the prospect of indulging in good Mexican food.
Alas, it was not my evening! The facade was pleasant enough, and even the cantina effect was alright. I don't think one can call it a restaurant - canteen, cantina, cafeteria might be better words. Then again, there is nothing wrong with that as long as the food satisfies the palate, is there?
So anyway, at Ristras, you need to queue at the counter to make your order, and you get to see them prepare your food. Not much of a spectacle, but at least you do get to see what goes in your burrito - or whatever you decide to eat. 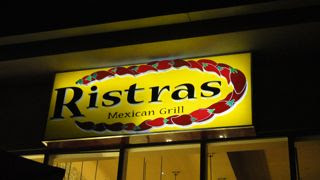 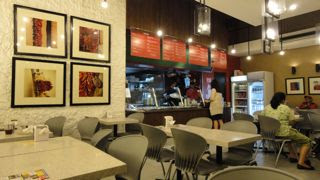 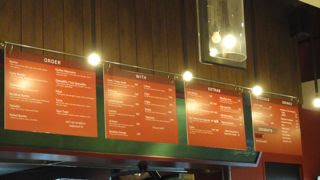 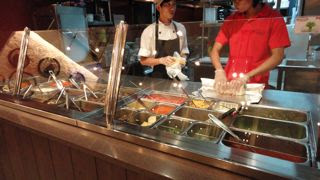 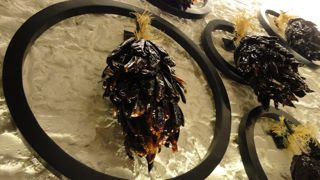 The unfortunate thing is that I found the food to be very poor, especially if the price is taken into consideration. For starters, I had Albondigas, a Mexican soup with meatballs. Ristras's version has noodles made from tortilla flour (I think). It was not bad, actually, but the flavor was too bland for me. For PHP190, it was okay. 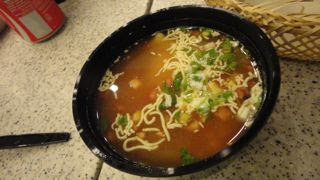 The burrito and "Taco Truck" were a whole different story, though. I can't help but see the Taco Truck as a big rip off. Given the name and the PHP300++ price tag, I was expecting something that would fill you up really good. Instead, this disappointing sight met my eyes. 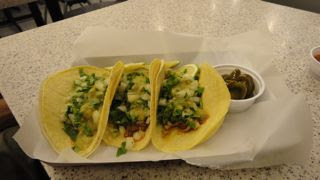 Three sparsely-filled hard taco shells with a side of serrano peppers (or maybe jalapeno). The peppers were the only good thing about the dish!
The burrito was more interesting, only because it was huge! The price tag (PHP300++) would have been totally acceptable because of the size, but the burrito had way too much rice, and I had to really dig deep to find the carnitas filling. As for the flavor - I was really, really disappointed. 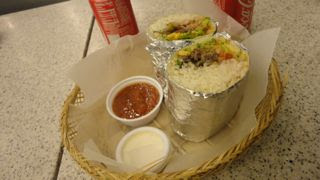 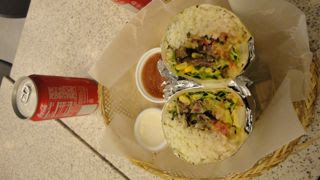 My taste buds may not be the most experienced, but I do know that Ristras was a fail. So here I am, still waiting for my Mexican craving to be satisfied. If I had the time, I would hit the road today and go visit Zapata's in Angeles City for some really good Mexican.

Oh, and there was something good that came out of the trip last night - I finally got to S&R, which had been in my plans for the longest time. Murphy just loved me yesterday, though. Right before leaving the store, as I was claiming the bags left at the counter (Gourdo's stuff), the saleslady dropped one, and boom - there went the Monin Cinnamon bottle. Fortunately, the manager reimbursed its cost. 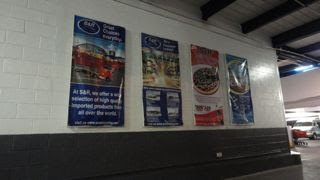 Fiasco? Just the Mexican, really. It's a pity because I was looking forward for a regular source of Mexican food. Now can anyone point me to something comparable to Zapata's? Heck, at this point, I'll even take Mexicali!
food Mexican food Philippines restaurants Ristras
Reactions: